The view above, the end of Arcadia Street, is what gave me the idea of writing about what lies between and behind Portland’s streets. I’m fascinated by dead-end streets — the ending really isn’t “dead,” in my opinion. It can be an open door to sights I’ve never seen and experiences I have to go “out of my way” for. 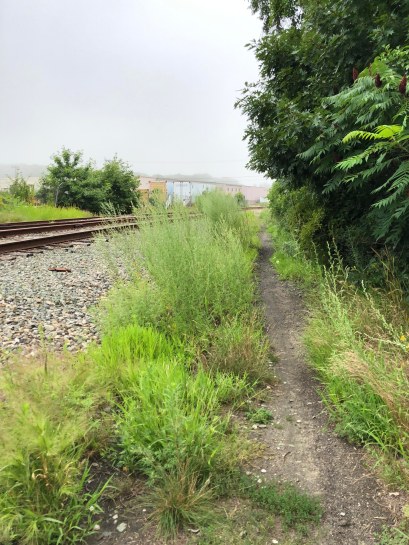 Arcadia Street runs off Veranda toward Presumpscot Street. Part of this neighborhood faces the outflow of the Presumpscot River, though it’s hard to see through the houses and foliage. Come fall it will be easier.

The other part of the neighborhood — this part — runs down to the railroad tracks that in the last couple of centuries were heavily used as transport between here and Canada. The Grand Trunk roundhouse and other buildings still stand on Presumpscot Street, though they’re used as offices and for other purposes. According to my reference, “Deering: A Social and Architectural History” (William David Barry and Patricia McGraw Anderson, Greater Portland Landmarks; 2010), Presumpscot Street also was the site of railroad-related industrial facilities including a grain elevator (not sure if there was more than one), stockyards, and a rendering company.

So I’m guessing it wasn’t as pleasant to walk along the tracks then as it is now. 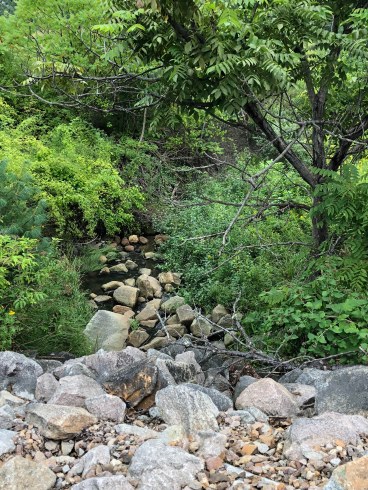 These days it’s all quiet once you cross the narrow strip of trees from Arcadia Street to the tracks. The back of Presumpscot Street is right there ahead of you, but nature has made its inroads on the in-between strip. Well, except for the occasional auto part discarded beside the tracks.

The beauty of this spot is subtle. It’s the appeal of the giant human footprint fading out as nature takes over. To either side of you, the human population has plenty going on, but you’re in the middle, out of the fray, gazing at goldenrod.

I’ve approached these tracks often from the Sherwood Street side, through a peaceful wooded area with a cemetery where my neighbors from the 18th and 19th centuries are buried. I’ll post about that some other time. I’ve also walked the short distance to the dramatically beautiful end of the tracks at Casco Bay (see “Fish Flakes, Anyone?”). This current walk is not flashy, not spectacular in any way. I just like it. 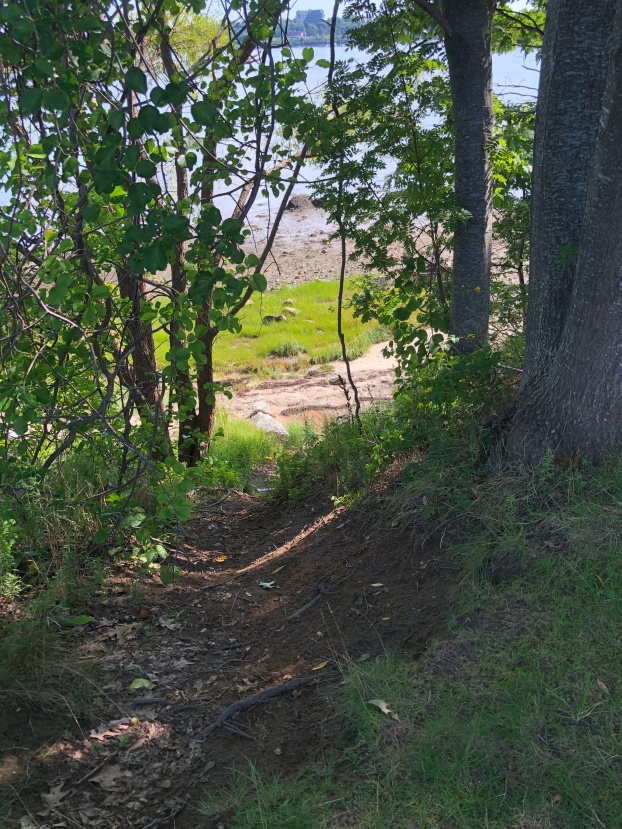 Martin’s Point juts out into Casco Bay right beside the outflow of the Presumpscot River. Facing the water, you can see another little peninsula — my immediate neighborhood — on the right, ocean and islands straight ahead, and Martin’s Point Bridge and Mackworth Island to the left.

It’s an expanse of ocean, distant islands and sky, interrupted by a line of dark trees that shade a peaceful walkway along the steep banking down to the shore. The view must have been a big attraction for guests at the Verandah Hotel, built on the point in 1846. Well, maybe in the beginning the guests cared about the view. The Verandah became known more for the all-hours, seven-day-a-week access to alcohol that it provided (because it was over the city line) than for its restful setting, according to my current reference, “Deering: A Social and Architectural History” (William David Barry and Patricia McGraw Anderson; Greater Portland Landmarks; 2010).

The poor Verandah didn’t last long — it succumbed to fire in 1851. The next occupant of the Point was the U.S. Marine Hospital — still an imposing presence today — which housed seamen in need of care. Now called the “Historic Marine Hospital,” the building is part of the Martin’s Point Health Care complex occupying the site.

I see I’m sliding into a historical perspective here — my intention for this blog was to talk about the quirky and beautiful parts of Portland. History was to be just a side note to provide context. But once you start reading about what happened somewhere, it’s hard not to talk about it!

On my walks, there’s nearly always something I find amusing. I actually shouldn’t find this amusing (and it’s kind of poignant, too. And I’m ONLY amused because of the song, which was one of the backdrops of my youth. I’m not callous, really!), but — if you’re my age or thereabouts, you may remember the song “The Sinking of the Reuben James,” lamenting the demise of the first U.S. warship lost in World War II. The version that became popular was sung by the Kingston Trio (which put me off from the song a bit, even though it was written by my idol, Woody Guthrie). If you remember the song, probably what comes to mind is the chorus, which I won’t post for copyright reasons, but which asks the listener if they knew anyone on the Reuben James, and if so, who they were. That’s probably enough to get the phrase going around in your head like a nice little earbug! 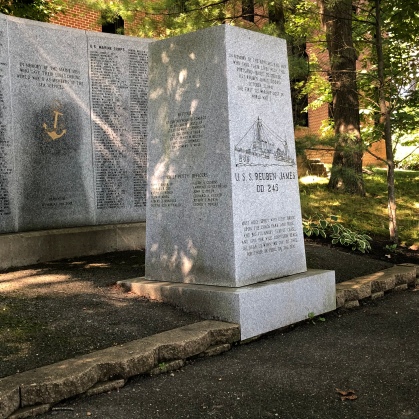 Well, the names of everyone who died are listed on a memorial to the Reuben James here at Martin’s Point. It always surprises me slightly to come onto this memorial, located in deep shade along the walkway. The ship was based in Portland, and many of the crew were from this area. The last names include familiar local names.

So that’s Martin’s Point. The walkway there is a small haven along busy Route 1. I’ve stayed after medical appointments to imbibe a little dose of serenity. Then I walk the mile or so home along Veranda Street — historically a busy thoroughfare from Martin’s Point Bridge to Tukey’s Bridge and a neighborhood of shipyards and blue-collar workers, as well as the more wealthy individuals who made livelihoods from the sea. I guess that’s another post! 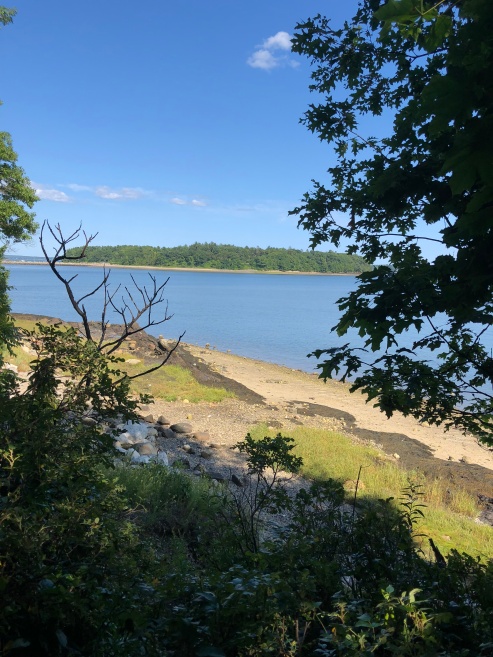